“Put photons on the target…..one guy, one laptop, with an XBox controller…” 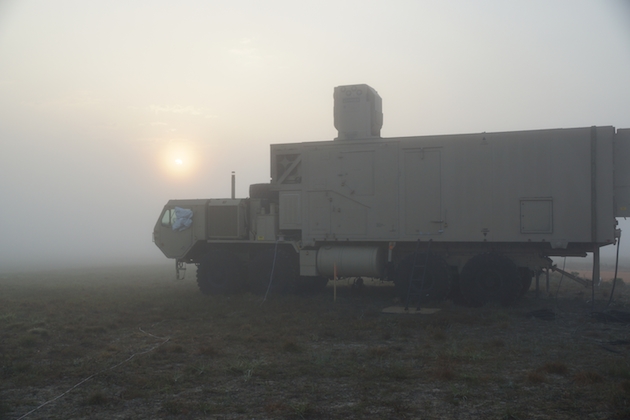 Boeing has a pretty storied history with lasers and now its testing one that can take out UAVs and rockets regardless of where it’s installed. A recent trial run of the tech was conducted in Florida under some pretty grueling conditions (heavy fog, rain and wind), to prove that even a lower-powered version of High Energy Laser Mobile Demonstrator — HEL MD for short — is capable in a maritime environment. As Boeing tells it, the firm exceeded all of its goals and successfully engaged with some 150 different targets including drones and 60mm mortar shells with its 10 kilowatt laser. Wired says that the energy beam is powered by lithium ion batteries, and that the whole setup only requires a diesel-backed generator to keep the wheels of war defense moving. Meaning, running out of fuel, not munitions, is basically the only threat the energy weapon faces.

Perhaps most interesting is the fact that the armament isn’t controlled by some arcane set of switches and levers: an Xbox controller and a laptop do the dirty work. The next logical step for the HEL MD? Upping the system’s damage with a stronger, 50- or 60-kilowatt laser. Naturally.

Impressive video at the link.