There’s a new surge in delivery service startups. One thing in common is they leave the logistics to someone else

In the tech crash of the early 2000s, on-demand delivery services like Kozmo and Webvan weren’t just among the most colossal failures. They also became a sort of grim joke,
symbolizing the excess that portended the bust. Afterward, conventional wisdom hardened: Web-enabled delivery was not a good business because it simply cost too much to build
warehouses, manage an inventory and pay drivers. There was too little opportunity to recoup expenditures in delivery fees; people will pay only so much for toilet paper to be delivered
before they decide to fetch it themselves. 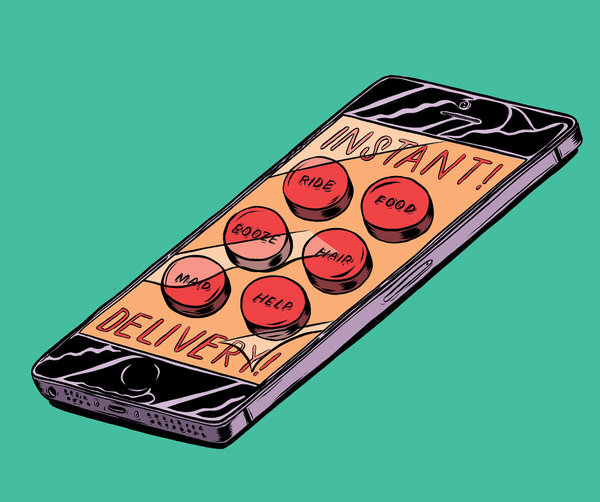 But something is in the air of late, making hindsight blurry. Despite the early demise of Rewinery and the shrunken ambitions of others, such as eBay Now, similar start-ups with names
like Caviar, SpoonRocket and DoorDash have raised half a billion dollars in investment in the last year, according to CB Insights, which tracks venture capital. Even Louis Borders,
the founder of Webvan (as well as the Borders bookstore chain, another Internet casualty), is at work on a grocery delivery start-up. Uber is using the $1.4 billion it just raised to expand
beyond delivering people to delivering things. Meanwhile, venture capitalists joke that every other entrepreneur they meet pitches an “Uber for X,” bringing goods and services on
demand: laundry (Washio), ice cream (Ice Cream Life), marijuana (Eaze) and so on. Investors are stuck wondering whether this is 2000 all over again, or whether this new breed of
delivery start-ups can succeed where the last crop so famously failed.